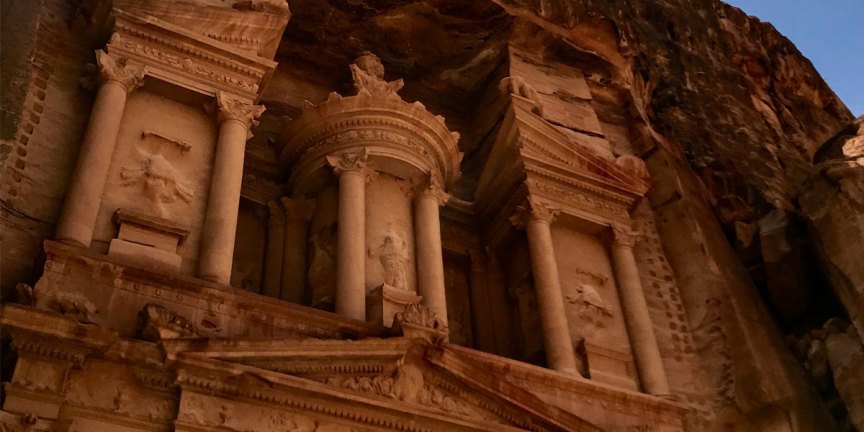 No one can deny the impact of a stunning and complete interior environment, but I find I derive the greatest inspirations from ruins. It is at the feet of destroyed buildings – crumbling cities – that my imagination truly runs wild, mentally reconstructing what must once have been. My husband recently surprised me with a visit to Petra, an ancient Nabatean city located not too Far East of the Dead Sea. For the once bustling capital, almost all that Colonization, Time, and numerous Earthquakes have left us are the city’s monumental funereal facades, masterfully carved into living rock.

I’m sharing with you some of the moments that inspired me most: the winding thoroughfare that brought us to the surprising city entry, their astoundingly scaled tomb structures, the internationally influenced marketplace, and other details, all to demonstrate their incredible detail and scale. This is not a case of finding details to be borrowed for new designs; it is an opportunity to imagine what we can do with our minds and hands when extraordinary sites and extraordinary invention are at our fingertips.

Sadly, the site is almost more famous for a façade that was featured in Indiana Jones and The Last Crusade. Tourists stop at the foot of the misnamed “treasury” building (it is a tomb, in fact), mount a camel, snap some photos, and head back to their busses. We miss so much when we do not explore on our own. Just turning the corner, Lior and I discovered market places, a massive public amphitheater, and so many more incredible moments of architectural magic.

We cannot forget to look beyond what is initially shared with us, and must always look for more… Most often we can find it, making the rewards of discovery that much sweeter.

Flying over the Dead Sea, Israel

Tombs along the causeway to Petra

A multi-generational Nabatean tomb outside Petra

The base of an arch over the Entry Road, sandstone carvings eroding slowly over centuries of sand-filled winds

A roadside Altar en route to the city

Carving Details at the Royal Tomb

The road down to the ancient Market

A sense of scale… this is the base of a tomb captured in the previous photograph, and consider that the ground has raised some 2 meters or more over millennia of sandstorms

Just imagine how grand these tomb structures must once have been..

A masterful sample of Nabatean carving

A stunningly monumental tomb in the distance. With more time, I’d have climbed up to see it.